In the closing months of 2014 I had several dining experiences that I never got a chance to write up, including at 2 new Princeton eateries. At this point you’ve likely heard and read about the major new places, such as Jockey Hollow. Nonetheless, allow me to weigh in with these quick hits:

Jockey Hollow Bar & Kitchen Morristown’s Vail Mansion is the gorgeous Italianate-meets-the-21st century setting for acclaimed restaurateur Chris Cannon’s return to the dining scene. I was a huge fan of one of his first NYC restaurants, L’Impero, and the press dinner I attended at Jockey Hollow last fall was of the same caliber. I am skeptical of press dinners because they can exceed what paying customers will get to experience, so was delighted to read the raves about the food and drink in this New York Times review of February 7, 2015.

SweetGrass Last October chef/owner Sarah Gresko took over the space in Hopewell that had been Bell & Whistle, and the NY Times rewarded her with this glowing report. She kept the attractive setting featuring natural stones and woods, but brought her modern sensibility of Southern fare. I really enjoy her shrimp & grits (with a hush puppy and pickled okra) and textbook-perfect creme brulee, but I wish the menu displayed a little more excitement and that the prices were a tad gentler. Also, am I the only one who finds the room beautiful but cold (visually and temperature-wise)? 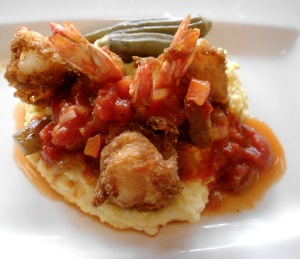 Mighty Quinn’s Barbecue I loved the barbecue when Mighty Quinn’s was at the Stockton Farm Market, touting it to everyone I encountered. I was devastated when it up and moved to NY, then delighted when it opened an outpost in Clifton. So imagine my shock when I and the five discriminating diners I dragged here were disappointed with everything we ordered, which encompassed pretty much the entire menu. This place is still garnering rave reviews, which baffles me.

Under the Moon Cafe This Bordentown restaurant isn’t new, but I hadn’t visited it since it moved several doors down to a larger space (in 2011) and expanded its Argentinean menu. OMG. The best empanadas ever, plus arborio rice balls stuffed with manchego, patatas bravas, albondigas in tomato sauce, etc. Every dish a winner.

Under the Moon, Bordentown

La Costenita This authentic Mexican market, takeout shop, and casual eatery has flourished because of the from-scratch, homestyle cooking mandated by its cheerful owner, Alicia Arango, who hails from Oaxaca. Her tacos, tamales, flautas, and other specialties are special enough to have overcome a location in a set-back strip mall in Hillsborough and having debuted during the lowest point of the recent economic downturn. Pictured below, from front to back, are sopes (including one with beef tongue) on homemade tortillas, plantanos, and tacos.

Washington Crossing Inn Fans of the erstwhile Za in Pennington take note: chef Mark Valenza is plying his trade at this lovely historic property just across the river in Bucks County. He’s bringing some spark to the tradition-bound menu with signatures like Navajo fry bread and Tsukiji tuna & shrimp with bok choy & fermented black beans.

Mamoun’s Falafel, Princeton Given its wide and devoted following in NYC and elsewhere in NJ, I waited with bated breath for this one to open on my home turf. You know what? The falafel IS really good. Everything else? Meh.

30 Burgers, Princeton As much as I like to support Jersey-based businesses, I have little positive to say about this place, a branch of the smallish 25 Burgers chain with locations throughout the state. I’m happy to see it succeed, but my notes about its bacon cheeseburger include “flat, foodservice-grade pattie” (for the record, they use 100% Angus beef) and “gummy, salty orange-yellow cheese.”

Mistral There’s nothing really new or changed at this Princeton sibling to Elements – if you don’t count the gorgeous, recently enclosed patio or that it now has has a liquor license – but I include it because (a) I want to end on a positive note and (b) chef Ben Nerenhausen’s eclectic small plates just get better with every visit. The menu changes frequently, but let me share two wows from this past fall: Hen-of-the-woods mushrooms roasted in chicken fat with prunes, cockscomb jus, polenta and shaved black truffle; and roasted duck ramen with duck confit, autumn pumpkin, and scallions.

Whew! Speed reviewing is exhausting. As is speed dating, or so I imagine.

DINING ALONG THE DELAWARE; APPLE PIE: YOU MAKE, I TASTE; PRINCETON RESTAURANT SCENE ABOUT TO GIVE BIRTH TO QUADRUPLETS

Admittedly, all but 1 of the 5 restaurants I profile in the Fall Dining Issue of US 1 are across the river in PA, but they each come with  great views of Central NJ. And there are some pretty noteworthy eats at, for example:

Charcoal BYOB in Yardley, where 2 young brothers are making waves as far away as Philly with their progressive American cuisine

The Yardley Inn: Just mere feet from Charcoal, updated traditional American fare shines due to the exacting standards of Chef Eben Copple, who deserves more recognition on this side of the river

The Black Bass Hotel: New owners who bought the outdated inn and restaurant upriver in Lumberville at auction a few years ago have given it a new lease on life.

Is Your Apple Pie Prize-worthy? I’ll be the Judge of That!

The West Windsor Community Farmers Market is holding a bake-off for home bakers on Saturday, October 11 and I am honored to be a judge, along with pro baker Karen Child (formerly, Village Bakery & Brick Farm Market) and Princeton food writer & restaurant critic Faith Bahadurian.

I make a pretty mean apple pie, myself!

Here are the details, straight from the market folks:

Amateur Apple Pie Bake Off Contest –Due to the overwhelming outpouring of peach pies in our August contest, we’ll be hosting an apple pie contest.  Think you make the best apple pie around using NJ apples?  Come show us your stuff!  Pies are due at the market at 10:30am with judging at 11:00am.  First, Second and Third place winners will receive Market Bucks to be used as cash at the farmers market this season.  Amateur bakers only and pre-registration is required.  To register, for more details and rules, please email wwcfm@yahoo.com.

Congratulations to manager Chris Cirkus and everyone at the West Windsor market for being voted NJ’s #1 farmers market for the second year in a row by American Farmland Trust.

Jammin’ Crepes: For years, Kim Rizk & company’s inventive sweet and savory crepes have been enjoyed at area farmers markets. Her long-awaited brick-and-mortar spot on Nassau Street has passed its final inspections & will be opening any day now.

Mamoun’s Falafel: Rumor has it  (thanks, Mimi O of Princeton Tour Company!) that this NYC chain with outlets in Hoboken & New Brunswick will at long last open its Witherspoon Street digs within hours. Fingers crossed!

Seasons 52: This well-regarded small chain that already has a popular Cherry Hill location will open on October 30 at MarketFair Mall (in the  space that had been Barnes & Noble). Seasons 52, self-described as a “fresh grill and wine bar,” changes its menu 4 times a year and sports an extensive wine list that includes 52 wines by the glass.

SweetGrass: The unique, beautiful structure that had been Bell & Whistle (byob) in Hopewell has just reopened with a new name and new chef/owner, Sarah Gresko. She terms her menu “bold American,” but much of it pays homage to her culinary training at Johnson & Wales in Charleston, SC. (Think fried green tomatoes & chicken with andouille cornbread stuffing.)