My annual round-up of the best and the brightest at the Summer Fancy Food Show is out – check it out here in the July 3 issue of US 1 newspaper. Bonus: one additional find I don’t mention in my story: 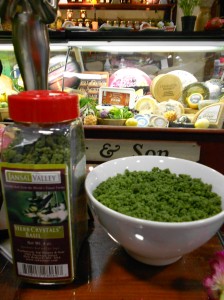 Jansal Valley Basil Crystals, basically bits of shelf-stable fresh basil mixed with sugar. Interesting, to say the least, and the flavor of fresh basil really shines through. I came across it at the Sid Wainer booth, but it does not appear to be available online yet.

You Asked for It: Orange Soda BBQ Sauce Recipe Redux

I’ve been getting lots of requests for the recipe for Grilled Chicken with Orange Soda BBQ Sauce that was featured in my Princeton Packet column for Father’s Day. I linked to it in a previous post, but the article is no longer free at centraljersey.com so I’m reprinting it here – just in time for your Fourth of July cookout.

Don’t let the seemingly long list of ingredients fool you. It couldn’t be simpler: Basically, you combine all the dry rub ingredients in a bag and all the bbq sauce ingredients in a saucepan. That’s it. You could even omit the spicy rub and use only the sauce.

The recipe is the creation of Chef Jeremy Stahl, 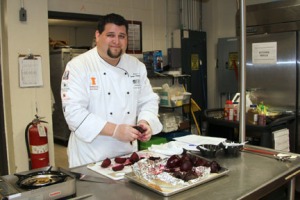 who teaches for-credit and non-credit culinary classes at Mercer County College. This recipe is just one of several he’ll feature in the class he’ll conduct on July 21st called Great American Summer.

1. Make the BBQ rub by placing all ingredients in a bowl and mixing them together well. Store in a sealed plastic container until ready to use. (Can be made well in advance.)
2. Make the BBQ sauce by combining all ingredients in a medium saucepan and heating to just a simmer. Allow to cool, cover pan, and set aside or refrigerate.
3. The morning of the day you’ll be grilling, rub the chickens with the BBQ rub and place in the refrigerator until you’re ready to cook.
4. Preheat the grill to medium heat (325 to 350 degrees). Divide the BBQ sauce between two bowls.
5. Place the chicken on the grill rack as high above the flame as possible to minimize flare-ups and charring. Cook chicken with the lid down. Total cooking time should be between 30 and 35 minutes. During the final 10 minutes, brush the chicken with some of the BBQ sauce. The chicken is done when it reaches 165 degrees on an instant-read thermometer. Serve chicken with the remaining bowl of BBQ sauce on the side.

Scott Anderson and Steve Distler, the fellows behind Elements in Princeton – one of the state’s top-rated restaurants – have announced that they have a new collaboration in the works. Mistral will open in Princeton this September, in  the space that for many years had been Ichiban.