Before I get to the restaurant stuff, I want to let you know you’ll be getting a second posting from me today. On Monday I composed and thought I had published a post on what restaurants are doing to raise funds for Hurricane Sandy relief. Somehow I forgot to press the “publish” button. I’m blaming that on Sandy. Although I was one of the lucky ones – only 3 days without power, no damage – I have noticed that I’m not multitasking as efficiently as usual. Have you noticed the same? 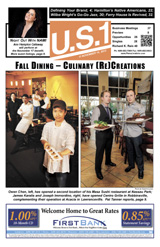 Despite the soft economy, some veteran restaurateurs in Central NJ are adding sibling restaurants to their existing stable. Read my profile of them and their new and forthcoming restaurants in the 2012 Fall Dining Issue of US 1.

Among the restaurants: A second Osteria Procaccini, a second PJ’s Pancake House, North End Bistro, Masa Sushi, and Centro Grille. That last, btw, is from the current owner of Acacia in Lawrenceville.

Just: A Fine Dining Restaurant on Route 9 in Old Bridge

Read my review of this ambitious undertaking on an unlikely stretch of that roadway, from the November issue of New Jersey Monthly.

An interesting lineup of NJ chefs is cooking up a collaborative feast for a good cause at Scott Anderson’s elements in Princeton. A portion of the proceeds goes to the Stony Brook-Millstone Watershed Association. Taking on one course each are David Felton of 90 Acres, Josh Thomsen of the highly anticipated Agricola, Gabby Carbone of the Bent Spoon, Will Mooney of the Brothers Moon, and Chris Albrecht of Eno Terra. The evening will begin with hors d’oeuvres at 6pm. For information and reservations click here.

I hereby predict that Maricel Presilla‘s new book will sweep the next round of major cookbook awards. It’s a 900-page treasure trove not only of recipes – 500 of them from all over Latin America – but also, as I write here in my Princeton Packet column, an engrossing, beautifully written culinary and social history. At $45 it makes a great holiday gift.

Robbinsville Gets New Restaurant from a Veteran: 3rd Time’s a Charm?

Joe Immordino of Acacia in Lawrenceville has added a second, more casual restaurant to his stable. 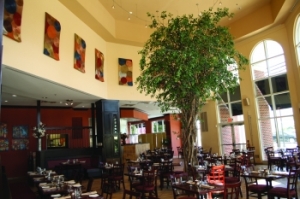 Here’s my profile  of Centro Grille from the October edition of The Advance. Centro Grille,which Immordino calls “a restaurant for locals from locals” is situated in Robbinsville’s Town Center, in the space that had last been Poseidon and before that, Santino’s. Cropped screenshot of Vincent Price from the trailer for the film Laura. (Photo credit: Wikipedia)

I could not have been more tickled to learn of this Halloween’s themed dinner coming up at The Orange Squirrel in Bloomfield. As owner/chef Francesco Palmieri points out, “We all know Vincent Price as the King of Horror, but the master the macabre had a very interesting but lesser known side: he and his wife Mary were food connoisseurs.” In fact, they wrote several cookbooks together. Palmieri’s 6-course dinner draws from their Treasury of Great Recipes, but I am proud to say I am the owner of one of their more obscure works, Come into the Kitchen, which has become somewhat of a collectible.

Guests are encouraged to bring Vincent Price memorabilia and share stories. Writes Palmieri: “This will be an interactive dinner where Vincent Price movies will be shown, music played, and discussion welcomed. Guests should feel free to dress expressively.” For menu, details, and reservations, visit the Orange Squirrel on Facebook.